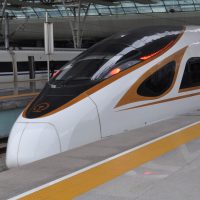 Welcome to another Brian’s Travel Spot. In case you’ve not been paying attention, I’m in Shanghai, having flown out two weeks ago for a week of work, followed by a week of sightseeing and Coffee Spotting. Having visited Shanghai last year, I was keen to explore a little bit more of China and, buoyed by travels by train in both Japan and Vietnam earlier this year, I contemplated taking the train to Beijing.

A little bit of research on the ever-useful The Man in Seat 61 showed that the train was considerably cheaper than flying and a lot more convenient. Not only that, as long as I caught the right train, I would be travelling on the world’s second-fastest passenger rail service, which appealed to the geek in me, especially since I’d already travelled on the world’s fastest passenger rail service when I caught the Maglev train serving Shanghai Pudong airport.

After further research, I decided to catch a regular high-speed service from Shanghai to Beijing on Saturday, the day after my meeting ended, returning four days later by sleeper, leaving Beijing on Wednesday night, arriving in Shanghai on Thursday morning, giving me three days to explore before flying home.