I’ve already written about my ignorance regarding Lichfield when I visited the Melbourne in Lichfield coffee shop on Bird Street. However, this is where it all began in April last year, when the original Melbourne in Lichfield opened, a small kiosk on a narrow alley called Bolt Court in the heart of the city. There’s not much to Melbourne in Lichfield, but the output’s impressive, reminding me in ambition of Reading’s Tamp Culture, albeit with slightly more shelter.

It consists of a kiosk with a small, covered seating area to the left and with three bar stools at the counter, semi-exposed to the elements. The coffee is from Union Hand-roasted with a house espresso, Maraba, a single-origin from Rwandan, plus a guest espresso from either Union or a guest-roaster as well as decaf (Union again). There are retail bags from Union and various guests, plus a decent selection of cake.

December 2019: I’ve learnt that with the continued success of the new coffee shop on Bird Street, Bolt Court has been closed.

END_OF_DOCUMENT_TOKEN_TO_BE_REPLACED 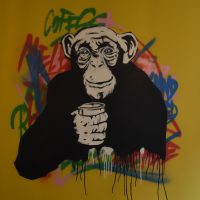 I must confess that for many years, Lichfield was just a place name that I would have struggled to place on a map. It took more shape as Lichfield Trent Valley, a station that I sometimes passed through on my way to/from my parents in North Wales, which at least allowed me some idea where it was. However, it wasn’t until Melbourne in Lichfield burst onto my twitter feed a year ago that I really became aware of it.

Melbourne in Lichfield, it turns out, was a small coffee kiosk in an alley, Bolt Court, in the centre of this rather lovely West Midlands cathedral city. By the time I visited, a year after it opened, Melbourne in Lichfield had outgrown its humble origins and opened a second branch, a stone’s throw away on the broad, pedestrianised Bird Street. In contrast to the kiosk (which has since closed), this is a full-blown coffee shop, offering several, albeit small, rooms of seating.

There’s coffee from Union Hand-roasted and a regularly-changing guest roaster, with a house espresso, Maraba from Rwandan, plus a guest espresso and various options on pour-over through the V60. If you’re hungry, there are toasties, bagels and an impressive array of cakes.

February 2019: Melbourne in Lichfield now roasts its own coffee, although Union still makes regular appearances as the guest roaster.