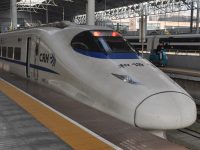 On my recent trip to China, I spent a few days exploring Beijing, taking the high-speed train from Shanghai, which I recounted in an earlier Travel Spot. In today’s instalment of Brian’s Travel Spot, I recount my return journey from Beijing to Shanghai. Having gone up on the world’s fastest inter-city passenger service, I decided to do things a little differently on my return, instead taking the overnight sleeper. Although a little more expensive than the train up, when you consider it saved me a night in a hotel, it was still very cost-effective and far more efficient than flying!

Once again I’m indebted to the ever-useful The Man in Seat 61 for all my pre-trip research. There are four sleeper services from Beijing to Shanghai each night, once conventional service which leaves first at 7.31, and arrives some 15 hours later in Shanghai, and three high-speed services, which take 10 hours. One of these leaves at 7.34, while the other two leave at 9.16 and 9.23. I decided to catch the last of these, allowing myself a leisurely evening in Beijing after a day spent visiting coffee shops, and arriving at the civilised hour of 9.13 the following morning.