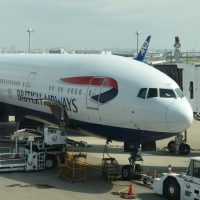 Last week I wrote about my flight from Manchester to Tokyo’s Haneda airport via Heathrow. This week it’s the turn of my flight back, on Friday, 27th July, two weeks to the day after I flew out. As I mentioned in the previous Travel Spot, Tokyo has two international airports, Haneda and Narita, with British Airways having one flight per day to each. It’s perfectly possible, by the way, to fly into one airport and out of the other, but, as with my flights over, price dictated that I flew both into and out of Haneda.

This left me on the 08:50 flight from Haneda, an entirely unreasonable time to be at an airport, let alone to be taking off from one. Since we were heading west, this was a daytime flight, scheduled to arrive at Heathrow at 13:10 local time on the same day, 12 hours and 20 minutes later. From there I had a connecting flight to Manchester at 16:00, touching down in at 17:05, a mere 16 hours after I set off.

However, before any of that could happen, I had to get to the airport from my hotel in Nishi Azabu.

END_OF_DOCUMENT_TOKEN_TO_BE_REPLACED 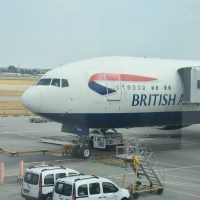 This is my second trip to Tokyo, the first one being in April last year when I made a rather hastily cobbled together visit. This year, despite having had less notice (I only found out I was going at the start of June and only had confirmation four weeks before I flew on July 13th), I managed to do a little bit more planning, although the end result was a much less ambitious trip, where I stayed in Tokyo for the two weeks I was there.

Both times I flew with British Airways, last time in economy (World Traveller) and this time, since I had the money in the travel budget, in business class (Club World). As I’ve been doing the last few times I’ve travelled, I flew to and from Manchester so that I could visit my 85 year old Dad before/after the trip. This meant taking the short hop down to Heathrow and catching a direct flight to Tokyo from there.

It was also the first time I’d flown with British Airways since it started serving Union Hand-roasted coffee in its lounges and in Club World and First Class cabins, giving me the chance to try it out.