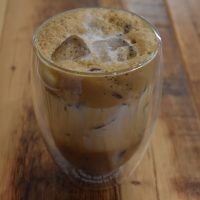 I’d noticed Phin Coffee House on my last visit to Boston in February, but with an already-full itinerary, Phin went on my potentials list instead. When I returned to Boston for a one-day downtown tour on Monday, Phin was still a potential destination, but after my first stop of a packed day at Intelligentsia Coffee, where the barista recommended it, Phin moved to the top of the list. A recent addition to Boston’s speciality coffee scene, Phin only opened a year ago, occupying a spot at the western end of the High Street, conveniently just across the Rose Kennedy Greenway from South Station.

Phin is a Vietnamese coffee shop, owned by a lady originally from Ho Chi Minh City. There’s a fairly traditional third wave offering of espresso-based drinks, batch brew filter, pour-over and cold brew, all using a bespoke house blend and decaf from Barrington Coffee Roasting Company in western Massachusetts. This is joined by a number of house specials, including Ca Phe Phin, made with the Vietnamese cup-top filter of the same name. If you’re hungry, Phin has a range of sandwiches and more substantial plates and salads, mixing Western and Vietnamese classics, plus a selection of cakes.