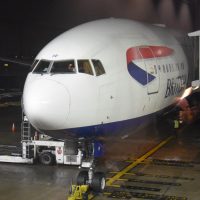 Welcome to the third and final instalment of the first Travel Spot of 2019, covering my first trip of the year. This started when I flew to Phoenix on the 4th January, getting upgraded to First Class along the way, and ended with my return from Chicago on 1st February, when I had to slum it in business class. Along the way I spent two weeks in the warm, winter sun of Arizona and New Mexico and then flew from Phoenix to Chicago, arriving in time for the polar vortex and the second coldest spell in Chicago’s history.

In all, I spent four days in the suburbs, hanging out with my friends, before catching the commuter train into Chicago proper, which was when it got really, really cold. Perhaps fortunately, I was there for work and, knowing the reputation of Chicago winters, had already booked the hotel in the same building as my office, so I didn’t actually have to go out… The downside was that I only had a single day to explore, but, given the weather, that’s probably just as well. Then, as soon as my meeting was over, I was off to O’Hare for my flight home.