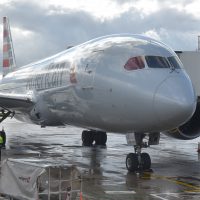 This time last year I was preparing for the second of three flights to Chicago, which I took using a different combinations of airlines/routes, writing each up in its own Travel Spot. I’d originally thought that I’d be making the trip quite regularly, maybe four or five time a year, so part of my research was to work out the best airline/route. Assuming that I was starting from my Dad’s, I decided that by far the best option was flying direct from Manchester with American Airlines.

However, circumstances change and this year, I’ve just got the one trip, departing on August 24th and returning four weeks later. So, while my research wasn’t completely wasted, it wasn’t as useful as I’d hoped. As suspected, I found myself flying from Manchester, so I booked my flight out on American, but, to my dismay, discovered that there weren’t any direct flights back, American discontinuing the route in early September. Instead I decided to cut my losses and, rather than returning to Manchester, I flew direct to Heathrow with British Airways. That, however, is another story, one which is covered in its own Travel Spot. Today, I’m focusing on the flight out with American.