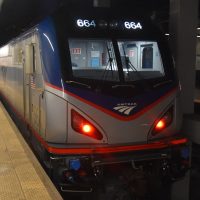 Welcome to the second instalment of this edition of Brian’s Travel Spot, covering my latest Grand Adventure. In the first instalment, we saw how that no sooner had I returned from my previous trip to Florida/Phoenix than I was off again, flying out to Boston. My dilemma, if you can call it that, was that I had to be in Phoenix (again!) three weeks later. Rather than fly home (again), then fly back to the US (again), I decided to stay in the US, slowly making my way from northeast to southwest, taking in some sights as I went.

Given my dislike of flying in the USA, and my past record of taking ludicrously long train journeys, it should come as no surprise that I decided to do the whole trip by train. Or, at least, as much of it as I could, a route that took me from Providence, Rhode Island, down the eastern seaboard to Washington DC, with stops in New York, New Jersey and Philadelphia. From there, I took two overnight trains, one to New Orleans and the other from New Orleans to Tucson, Arizona, where I hired a car to drive to Phoenix, my final destination, from where I flew home.