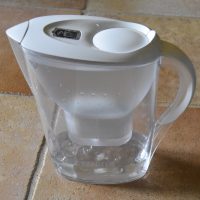 My Making Coffee at Home series is designed to help you make better coffee at home. I’ve written about various coffee brewing methods, discussed the importance of equipment such as grinders and scales, and even talked about the coffee itself. However, there’s one important topic that I haven’t mentioned until now, and that’s water.

Given that a cup of coffee contains around 98% water, it seems obvious that it’s important, but it’s often overlooked. Although water quality is pretty good in the developed world (that is, it’s drinkable and won’t make you ill), its chemical composition varies widely. Water contains all sorts of dissolved minerals which affect both its taste and its ability to extract the flavours in coffee.

You might think that distilled water (that is, pure H2O, with no dissolved materials) would be the answer, but it’s not. Distilled water is actually rather poor at extracting coffee: it turns out that minerals such as calcium and magnesium (both common in water), are rather useful in enhancing extraction, while carbonates also play a role. So in today’s Making Coffee at Home, I’m going to look at what makes good water for coffee, and, more importantly, how to get it.

END_OF_DOCUMENT_TOKEN_TO_BE_REPLACED 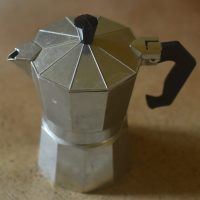 Up until now, Making Coffee at Home has focusedon brew methods which I regularly use: cafetiere, Clever Dripper, AeroPress, pour-over and espresso. Today’s post is different since I’m writing about the moka pot, something which I own, but stopped using many years ago, unhappy with the results. I moved onto other brewing methods and my moka pot has sat at the back of a shelf ever since.

My interest was initially rekindled by tweets from Phil Wain (editor of Caffeine Magazine) which got me thinking that maybe I should write about the moka pot after all. I began the Making Coffee at Home series with a desire to help people make good coffee at home, particularly people who are new to making good coffee. Although I’ve tried to take you on a journey through the various preparation methods I regularly use, I know that not everyone will have the time to invest in learning a new method. Similarly, many of you won’t want to buy new coffee equipment. However, I suspect that, like me, plenty of you have a moka pot somewhere in your kitchen. So, I got my moka pot down, dusted it off and here we are…

END_OF_DOCUMENT_TOKEN_TO_BE_REPLACED 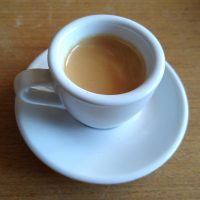 Welcome to another instalment of my Making Coffee at Home series, where I’ve left the best (hardest?) until last. After simple guides for the cafetiere,  Clever Dripper, AeroPress and (not so simple) pour-over, I’ve finally turned my attention to espresso. Just to be clear, whereas for all my other guides (including pour-over to some extent), you can get decent results with minimal outlay, this is not true for espresso. If you want good espresso, you’re going to need to spend a lot of money on both a good espresso machine and a high-quality grinder (I’d say a minimum of £500).

Now that’s not to say that you can’t made short, strong black coffee at home. You can. The AeroPress, Vietnamese cup-top filter,  ibrik/cezve, moka pot and capsule machines can all make good short, strong black coffee. It’s just not going to be espresso. That said, if you’re hankering after something approaching your favourite flat white/cappuccino/latte, then you can do a reasonable job with a variety of common coffee-making equipment (see, for example, this excellent video from James Hoffman). However, what this post is all about is espresso of the sort you’d get in a good speciality coffee shop.